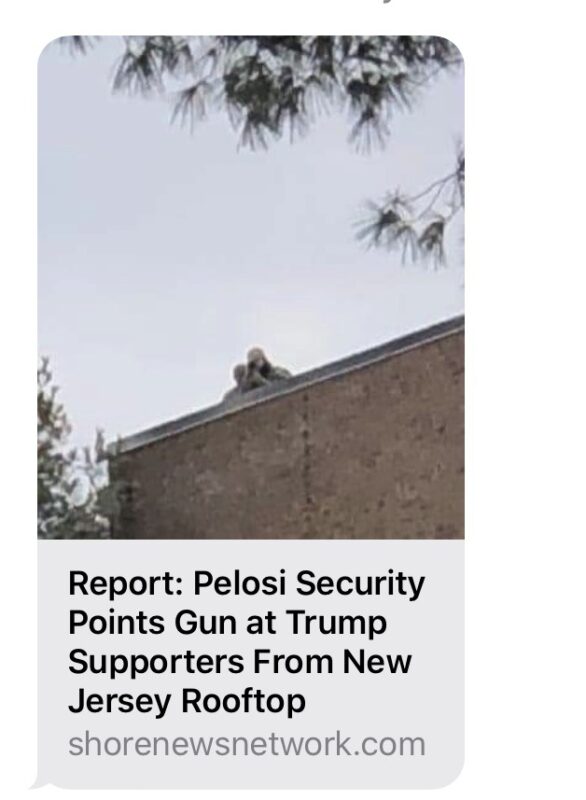 I was at that cluster they are trying to call a rally!
As I was walking up to building to go inside, I saw 2 guys on the roof and thought it looked like one was peering down the barrel of a gun at me and had me in his sights! As I got my phone out to take a picture 1 guy moved out of sight and the 2nd guy (in picture) seemed to turn his attention towards the street side of building and walk towards the right of the picture, where the Trump fans where gathered.
My attire was simply a zippered closed plain blue sweatshirt, blue jeans and worn boots.

Underneath, not visible to anyone until towards the end of the rally when I took off my sweatshirt and put on my hat, I wore my trump shirt and pulled out my concealed MAGA hat.

Even with everything concealed I was pretty much profiled by the mad gunman on the roof and the rest of the police inside. I was the only person in the entire small gathering that had a constant police presence of no less then 3 cops (ebb and flow 3-6) within 6 feet at all times. There were plenty of roaming police scattered about the entire event but I didn’t see any posted to any other members of the audience like they were for me!
Very very discriminatory policing! Could almost feel them breathing down my neck with distain just based on my physical appearance.

A few minutes before nasty nancy ended her rant I put on my MAGA hat and took off my sweatshirt exposing my Trump Make America Great Again shirt. Though I did nothing more then stand in the same place I had been, I was immediately approached by law enforcement in a suit and asked “what are you here for?” And why did I wait till the end to expose my shirt and hat.

When I explained that I was there to hear what the dems has to say because I can’t argue against their points any ideas unless I tru know what they are, he accepted that. But from that point on there where 4 police directly behind me and the little fellow in the suit (who I believe was secret service) immediately next to me until I left.

Whoever the criminal(s) on the roof are, pointing his (Their) gun(s) at law abiding citizens for no reason other then he felt he could should have his badge ripped from his chest by the AG, criminal charges pressed and be put in jail for a long long time!

I wonder if he was fantasizing about being in that upcoming movie in which they hunt conservatives for sport? No matter what he was thinking, he should be prosecuted!

Any lame excuses like “ just finding my range in case I need it” are invalid! Any shark shooter worth his salt has their ranges established long before the crowds get there and is accompanied by a spotter with a range finding scope!

He was just a criminal involved in criminal activity!

I got 1 no longer feel safe as a law abiding citizen attending any public rallies!

I have pictures and video I will attempt to attach but am somewhat of a flintstone. So if you don’t get pics and video email me from a regular email and I will submit them that way as well.

Just tried and can only submit 1 pic, it’s my pic of guy on roof. Contact me for the rest. I’ll be glad to supply them.