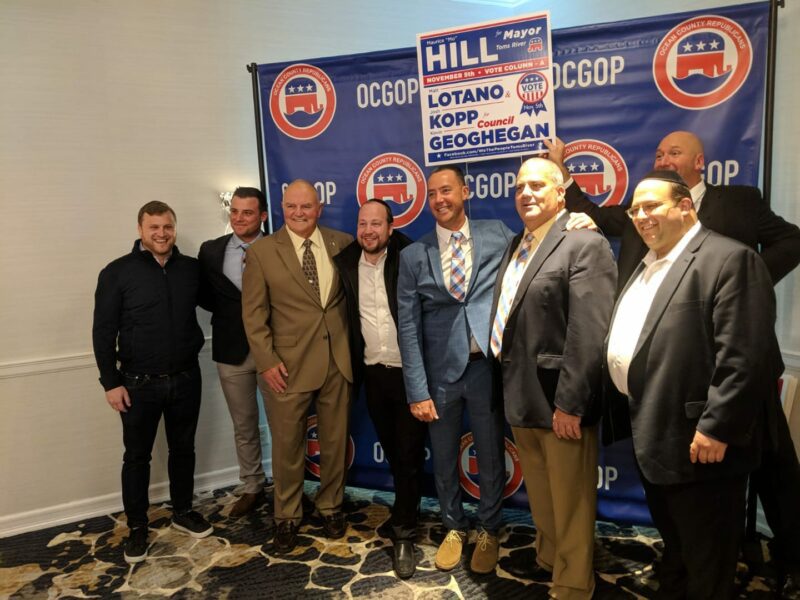 Hill himself is not a member of the Toms River Republican Club.  He quit.  Last year, when the club membership voted to endorse former Ocean County Prosecutor Joseph Coronato, Hill went ballistic.  He resigned from the club and blamed club leadership for working against him.  He went out, found new friends and ended up defeating the club in the June 2019 Republican primary. Those same friends propelled him to an extremely narrow Republican victory that saw nearly 1,200 Republicans vote against Hill.   Hill was carried across the finish line through his air-tight endorsement and support from a large voter turnout in the North Dover section of the town.

Now, Hill wants all the marbles, including the Toms River Republican Club, for which he remains an outsider.  Not able to get his way back into the good graces of the party, Hill and his key ally, New Jersey Assemblyman Gregory P. McGuckin, whose firm also serves as the Lakewood Township Zoning Board attorney, have launched a hostile takeover attempt.

Hill, McGuckin and Holman are targeting a woman.

Geri Ambrosio serves as the president of the Toms River Republican Club and Hill can’t stand it.  Ambrosio maintained her support for Coronato during the vicious primary election campaign.

“The club endorsed Joe [Coronato],” Ambrosio said weeks after the election.  “I had to respect the club’s decision.”

After the executive board members refused the offer by Hill, Holman and McGuckin to meet at the Ocean County party’s headquarters on Wednesday, allies insisted things were going to get ugly at Thursday’s Toms River club meeting.

McGuckin called for Ms. Ambrosio’s immediate resignation.  McGuckin, as you may recall, served as Hill’s transition advisor after the November election.   The attack against Ambrosio stands in direct conflict of Holman’s master plan to make his party more diverse, to include more women and minorities in leadership positions.   Hill, Holman and McGuckin’s plan, according to insiders is to replace Ambrosio with a man, Toms River attorney Robert Shea.

For now, the club leadership stopped Mo’s running play up the middle at the line of scrimmage.  Despite heated debate and accusation slinging from Hill’s allies, the executive board did not take any actions on the matter and now the Hill Gang will have to wait until next month’s meeting to try another coup attempt.

As a result of the fracas, the club also did not attend to more serious business, such as the endorsement of candidates for U.S. Senate and U.S. Congress ahead of Wednesday’s convention.

Most of Toms River’s votes will be cast by Ambrosio on Wednesday.