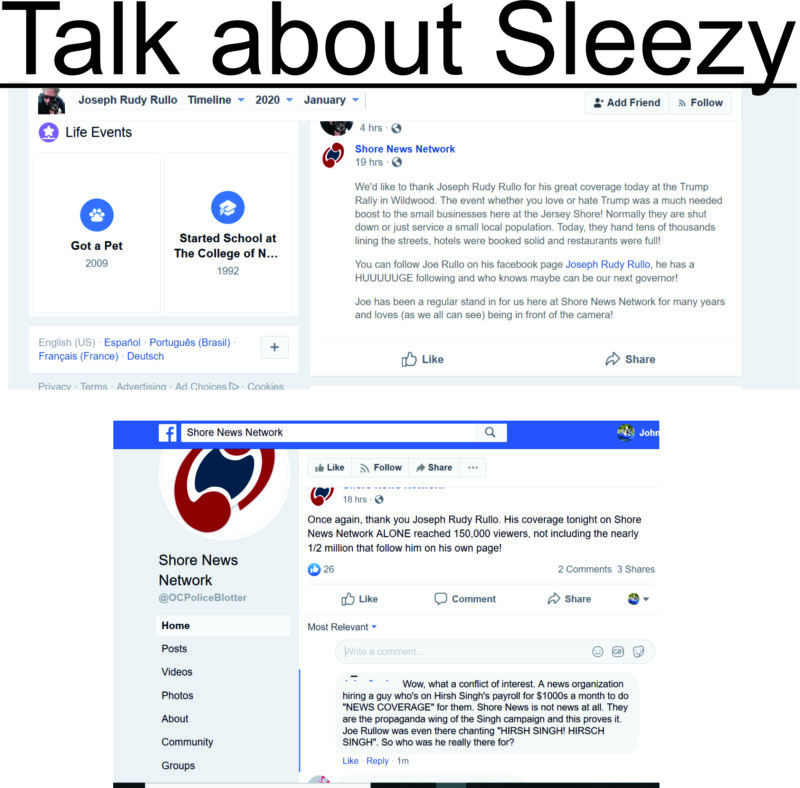 A news organization has hired the campaign manager to cover the Trump Rally where he was seen promoting a candidate. This is a huge conflict of interest that could really upset the NJ Senate Race, and deserves to be investigated.

Yes, indeed, Joseph Rullo did represent Shore News Network at the Trump Rally. The Trump campaign awarded us some great press passes, but we had absolutely nobody to go.  Being New Jersey’s #1 conservative media, you would think maybe even our local GOP would have offered, but they want to put us out of business for calling out their own corruption and that didn’t happen.

With three press passes and nobody to cover the election, we chose Joseph Rullo, one of Donald J. Trump’s HUUUUUGEST supporters in the Republican Party.  Joe is a member of the screen actors guild and whether or not he works on Hirsh Singh’s campaign, we ya, we also fully endorse, it was a great opportunity and he did not promote Hirsh during his coverage. He provided a great inside, first look that none of the other news networks who absolutely hate our President did.  He provided great coverage of the rally that none of the left-wing news outlets covered.

Joe did a great job and we’d ask him again if Trump came back and his office gave us the invite.

Joe reached almost 250,000 people and spread the good word from everyday conservatives at the rally, giving them a voice that is often suppressed by the bluish GOP establishment in New Jersey and Ocean County.   Hundreds of our readers complimented Rullo for going on the ground inside and out and not doing what the other media did, painting a bad picture of the event. He interviewed many patriots and Trump fans and it was just an all around great thing for our President here in New Jersey.

You are obviously some sort of GOP establishment hack who probably did not support Trump.  Was it Kasich or Jeb?

Thanks again to Joe Rullo who, by the way, did NOT get paid for the event.  He was just so happy to get VIP access at the event.  After all, being one of Trump’s #1 supporters in the state with the LARGEST media presence and social media following of ANY past/present Republican political candidate in New Jersey, you should be happy for him too.

P.S. if you are on the Ocean County Council vote Hirsh Singh on March 4th to continue the red wave here in New Jersey.